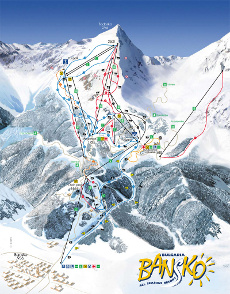 Bansko small town set at the foot of the scenic Pinn mountains. Best developed ski resort in Eastern Europe, an attractive old town with a modern lift system and hotels of international standard.

Bansko is now Boomtown Bulgaria, much the most successful and challenging resort in Eastern Europe – and, thanks to an investment of €130 million by a Sofia-based consortium, the only one to have a modern lift system.

What began in the 1980s as a one-lift ski resort in the Pirin Mountains has been transformed in recent years into the ski capital of the Wild East. Foreign investors, spear-headed by the British, have rushed here to buy bargain-priced apartments for holidays and rental income.

The mountains here are perfectly shaped for snowsports with the kind of awe-inspiring terrain that befits a future Verbier, or at least a Les Arcs. The resort has a long season that usually runs from mid-December until mid-May, and it had excellent snow-cover last season.

The ski area is of a similar size to Alpbach and larger than Niederau in Austria. A new 'village' of modern hotels is being built just above the town around the Doppelmayr gondola that forms the backbone of the lift system. The gondola takes you up to the mid-mountain area at 1725m, where a small network of lifts takes you on to the highest point at 2560m. At present Bansko has a vertical drop of 1100m – or 1600m if you include the long, gentle coast-and-pole back to town. The final 7km is floodlit and covered by snow-cannon. Bansko has an electronic hands-free lift pass.

The present piste map represents a creative view of future development rather than a current record of available mountain transport. So far Ulen, the Sofia-based company developing the ski area has not revealed any detailed plan for a much-needed second gondola

Things To Do In Bansko

Adjacent to the Hotel Strazhite (ulitsa Glazne 7) is a bowling alley, and there is an ice rink (ulitsa Pirin) near the Kempinski Hotel. For younger kids, Babini (ulitsa Bratya Veleganovi St 14B) is a craft centre and cafe offering DIY pottery, painting and sock-knitting in a cosy atmosphere.