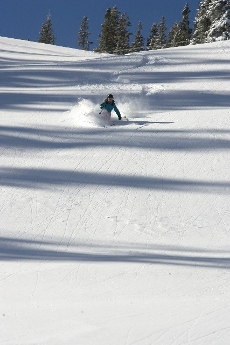 Now open to snowboarding, the mountain is known for steeps and bumps and is a favourite among many upper-intermediate and advanced skiers and snowboarders. Intermediate cruising is a delight on the wide open Ruthie’s Run. The Silver Queen Gondola transports skiers to the summit in only 14 minutes.

Buttermilk is located three miles (5 km) outside Aspen, and most of the mountain is groomed each night.

The skiing on Buttermilk is virtually impossible to define. First it’s the quintessential beginner’s mountain known for smooth, rolling trails. But if that’s Buttermilk, then why do all the locals pound down “Tiehack Parkway” when there’s 30 cm of fresh snow? Well, the Tiehack trail has steep left-handed funnels and glades that make it anything but beginner’s country, even if the main fall lines are easy.

Buttermilk is home to a superpipe and one of the world’s longest terrain parks from the top of the mountain to the base. Crazy T’rain, nearly two miles (3 km) long and features dozens of hits and over 30 rails. The Crazy T’rain Park has also been home to ESPN Winter X Games since 2002. A sound system has been installed near the superpipe and the X Games Slopestyle Course constructed for all to ride. There is also a new beginner terrain park S3 on Larkspur.

Highlands is where the locals go to get humble. At Highlands, there are wide-open trails and killer views – enough to keep an intermediate happy for a month, even greens you could send your mother down. But experience its hike-accessible terrain just once, and you’ll be amazed. Beyond the lift network and a short hike from the top of the Loge Peak lift, Highland Bowl features some of the steepest terrain in the United States.

Highland Bowl is divided into four zones; the south-facing R(ed) zone which receives the greatest amount of sun exposure, with Y(ellow) zone following, then B(lue) zone and finally, the coolest north-facing G(reen) zone.

The R-zone remains closed but the lower Y-zone was reopened in 1997 and gradually since then the patrol has opened the B-zone (allowing descents from the 12,392 foot/3,777 m peak) and a small part of the G-zone in 2001. From the peak the fall line has pitches of up to 48 degrees and is prime avalanche terrain. To safely open the area the ski patrol and local volunteers descend into the bowl (sometimes clipped into a belay!) and compress the snow step by step as they walk down and back up the mountain. The patrol does this with each new snowfall for the first few months of the winter to ensure that the weak Colorado snowpack forms a firm base. In the absence of these safety measures the bowl would be far too dangerous.

Snowmass now offers the whole range of downhill experiences from gentle cruisers to scary steeps. In fact you’ll find the greatest diversity of terrain among the four mountains on Snowmass, with hundreds of acres of beginner trails, steep and deeps, wide open cruisers, endless moguls, terrain parks, half-pipes and more.

Snowmass is the second largest mountain resort in Colorado and with 3,128 acres (1,266 ha), including glades, cruisers and bumps as well as three terrain parks and a halfpipe, it would be hard not find a perfect trail. And for getting up the slopes Snowmass has the longest lift-served vertical rise in the United States.

Snowmass is family-friendly skiing and more improvements are being made to the Family Zone on Snowmass.

Tube Town at Snowmass offers tubing seven days a week, and tubing on Snowmass is open until 8:00 pm.